A Dryer Transition Duct that Outperforms Rigid Aluminum (no kidding)

I had all the flexible venting removed from our laundry room and replaced with rigid aluminum, but Rueben Saltzman, a Home Inspector that I have come to rely on as a source of great information, has found a product, called "DRYERFLEX".  Need to replace venting in your laundry room?  ... read on and check out the Video!

If you are thinking of buying and/or selling real estate in South Simcoe, call me, Chris Smith @ 1.866.936.3500 for information and assistance in achieving your goals.

The video below, made by the manufacturer of this product, does a good job of comparing this material to foil and semi-rigid dryer transition ducts.

At the end of the video, they say they're confident this product will be rapidly adopted and become the industry standard.

After testing this product myself, I believe it.

To start my testing, I used the same test methods that I used to test the other dryer transition ducts - I filled the duct with shredded paper, started it on fire, then used a wet/dry vac to fan the flames.  I also tested a rigid metal duct made from thin-gage aluminum, just for the heck of it.  Rigid metal is approved by code to use as a dryer duct - not a transition duct, but an actual duct.  I did this by connecting two two-foot pieces together.

As you can see in the photo below, the solid aluminum duct failed where the two pieces connected together, but only after I had burned through most of the paper in the duct. 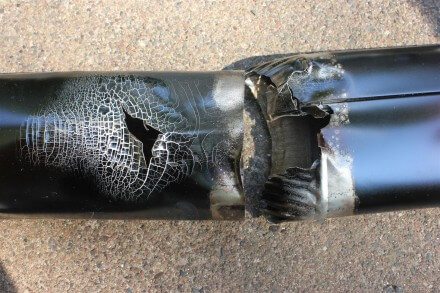 The results of my burn test with the DryerFlex duct were quite surprising... and unfortunately, I don't have any good photos to show you.  It was a very boring test, because I burned through all the paper and the DryerFlex duct never failed.  I couldn't believe it.  The photo below shows the DryerFlex material laying on the ground after the test.  I bent it up just to show that it was still capable of holding it's shape. 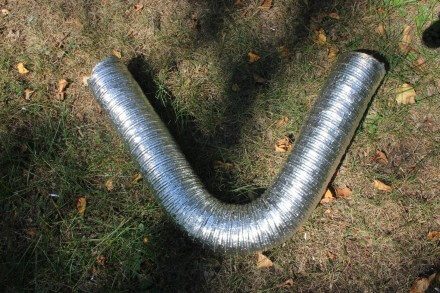 Because my testing method was subject to so much variability, I tried a more controlled burn test to compare different materials against the DryerFlex.  I held a torch 2" away from each duct and timed how long it took to burn a hole through the duct. 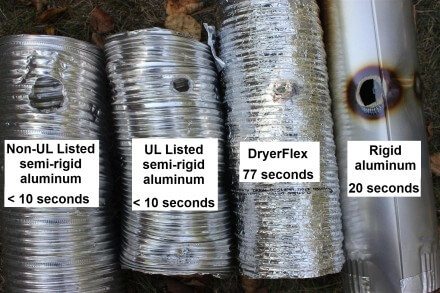 As you can see, the DryerFlex material outperformed the rigid aluminum duct by nearly a factor of four.  That's some tough stuff.  Dryflex is a far better dryer transition duct than anything that's available at home improvement stores.  The price is right too - at $6.60 for a 4' section and $11.99 for an 8' section, it costs about the same as the other products.

My only complaint with this product is that it's not available  at home improvement stores.  You can only purchase this stuff directly from their web site, where you might pay more for shipping than you do for the actual product.  If the manufacturer ever gets to the point of selling this stuff in home improvement stores for a comparable price, there would be no reason to ever buy a different product.